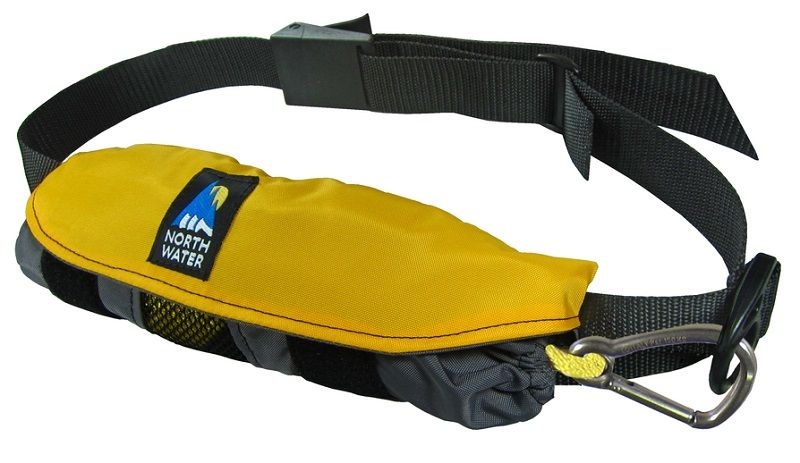 This waist mounted towline has a unique feature where it unrolls almost completely flat make repacking the rope at sea easier. With the bag in front of you, you fold the rope onto it then roll it back up into a bag securing it with a velcro closure. The bag has a mesh panel to help with draining.

The wide gate, stainless steel fixed eye keyhole carabiner clips to a robust and nicely shaped plastic parking anchor on the belt. The 40mm webbing belt is fastened with the usual plastic cam buckle release & toggle. There is a slider to allow adjustment of the buckle position to be set central around your waist.

You can deploy it without opening the bag by simply clipping on then paddling away. We found this feature works best when the rope is very carefully packed and the bag is closed loosely. It doesn’t work 100% reliably as the rope can snag but it is a great feature. You can also close the bag tightly making the rope more secure and the bag more compact.

A sown webbing loop inside the bag can be used as an anchor to clip to, to shorten the tow. An elastic bungee is tied to this webbing and partially covered with a nylon tube to reduce the chances of it snagging. We removed the bungee as we find with all towing systems we don’t need it and it makes repacking easier and reduces the chances of snagging on deployment.

The rope, which is a 6mm Premium Firm Handed Kermantle Floating Rope with Pre-tensioned Polypropylene Core, is tied into this. We found the dense weave of the rope made it less likely to accidentally knot although it does add weight to the system. It uses a slim line soft closed cell foam floatation to prevent the carabiner sinking.

This towline comes in a 15m and a 10m version. It also comes in a basic and pro model with the ability to upgrade the basic to the pro by adding the additional features later. The basic model has no bungee and a lower quality, and lighter, rope. The Basic would make a great first towline that you wouldn’t necessarily outgrow, but once you know more about your personal towline preferences you may prefer the features of the Pro.

Approaching two decades of working in the sea kayaking industry, Phil can be found on a daily basis coaching and paddling on the coastline of Anglesey. That’s when he’s not travelling the world expeditioning, coaching and testing kit.